Thus says Bevis – or it could be Butt-head. You will have to imagine the snigger as he says it – whichever one of them it was.

I do like words. I love words. They are tools and sometimes weapons, used to do good and harm.

Beneath the rule of men entirely great

The pen is mightier than the sword.

To me, the goals of literacy and the learning of English should be to understand how to use language and how to recognise and be wary of its abuse. I’m not talking F-words. I’m talking about how clever people – politicians or journalists, for instance – use words to manipulate or deceive. To me, Boris Johnson’s Brexit bus is a prime example. Never mind if he lied about the money that goes to the EU. The carefully worded slogan hints at funding the NHS rather than the EU, without promising that he would actually implement the redirection of funds. I believe many people read it as, “If we leave the EU the NHS will get more money.”

I taught Functional Skills for many years, and I love how it teaches the identification of bias and inference, fact versus opinion rather than the identification of techniques Dickens uses to present the character of Pip in Great Expectations. Yes, I’d love new generations to grow up appreciating quality literature; but the reality seems to be that they are growing up loathing Pip, while still being vulnerable to manipulation by twisters of words.

Words are also the gateway to knowledge, which in turn leads to better health, better job prospects, better relationships. In A Christmas Carol the Ghost of Christmas Present lifts his cloak to show Scrooge two children – Want and Ignorance. Of the two, says the Ghost, Ignorance is the more to be feared.

Martin Newell, performance poet, quoted this passage today at a rally in Chelmsford to protest at the proposed cuts to the library service in Essex. A third of the county’s libraries are threatened with closure. Newell himself grew up as a forces child, his family constantly moving. Taking books with them was not an option, so one of the first things they did in a new area was to enroll in a local library. Libraries were vital for him for learning to read. Backing him up, a local headteacher spoke about the importance of libraries as spaces for young people to study and revise for their exams. He talked, too, of a study that shows we retain more and lose ourselves more in a text if it is a physical copy.

I do hope that doesn’t mean you, dear reader, will skim this text then forget about it. Because library services across the UK and indeed across Europe are threatened with closure as councils seek to save money. If library closures go ahead, we lose so much. We lose books for our little children to learn to read with. We lose safe places for our older children to linger in, developing a love of reading. We lose knowledge for our teenagers to grow with. We lose a resource for those who can’t afford new books. We lose access to materials that will inform and enlighten.

We lose a resource that helps us open our minds to the world: to say no to manipulation; no to half-truths; no to prejudice.

I’ve delayed so long in writing this blog post that I find it now coincides with Reading Ireland Month – a lucky coincidence for me!

City breaks are perhaps the best solution to the problem of a family holiday with two older teenagers keen to remind us of all the downsides to breaks in the UK. The Wade family all found something interesting here, although our tastes only collided at dinner time. It’s possible I made a mistake not visiting Dublin’s Leprechaun museum like our daughter did, but the city’s literary delights that I did visit offered me a wealth of visual and creative delights nonetheless. Photos can largely tell the story of this visit.

We arrived on a wet Sunday afternoon, and while our teenagers elected to make the most of their hotel beds, Rick and I visited Merrion Square, the park Oscar Wilde overlooked as a child. He’s honoured by a flamboyant statue (statues are big in Dublin) and a pillar covered in some of his outrageous and insightful quotes. Do I agree with the one second from bottom in this photo? If so, my day job is far less worthy than I thought!

Our trip back to the town centre took us past a sculpture commemorating Ivar the Boneless, founder of Viking Dublin. Viking surnames of the heroic era are rich and strange, and Ivar’s is one of my favourite. There are many stories and theories as to how he got his name, but I favour the wilder ones that have him carried into battle on a shield due to his inability to walk: in this one, his military daring was clearly stronger than his physical strength. The legends of Ivar link with those of Ragnar Hairy Breaches, whose murder purportedly caused the Viking invasion of England and through Ragnar to the Saga of the Volsungs (Ragnar’s wives included Sigurd and Brynhild’s daughter) and the rich family line of East Anglia (one of the legends of Ragnar’s death has him murdered by a courtier of Edmund, last in the royal line that might link back to Beowulf. There’s a story here I mean to write one day.

As well as statues, Dublin is rich in wall murals, and these too commemorate the literary heritage of the city.

But the frontages are just as delightful.

A must for book lovers is the Book of Kells exhibition, housed in Trinity College Library.

The book itself is under glass and so only one spread is viewable, but there is plenty of information in the exhibition, supported by large photos from this or other examples of medieval book illumination.

Here is one from the 13c, showing a professional vellum-maker showing a monk one of his sheets for book production, while another is being stretched on a frame waiting for the vellum-maker to scrape the hairs off it with the curved knife leaning against it. Another shows and illustrates a lovely poem about a writer and his cat. The bond it celebrates is celebrated today via social media, but the cat’s role as cat-catcher has been replaced by havoc-maker. As I write this, our cat is sitting on my folder of research.

The highlight of the exhibition, however, for me, must be the library itself, a celebration of books and authors. I want to climb a spiral staircase, pick a book and sit at the top reading.

St Patrick’s Cathedral is full of visual delights, including a manuscript of Handel’s Messiah, which had its first ever performance here, in 1742. It went on to be a popular item at London’s Foundling Hospital, where the ticket fee went into the charity’s funds. Libby, in my novel ‘Foundlings‘, would have heard it many times. My photo of the music didn’t come out very well so here’s some street art to illustrate it instead.

Dublin is rich in architecture from the age of Handel, and Georgian doorways are everywhere. 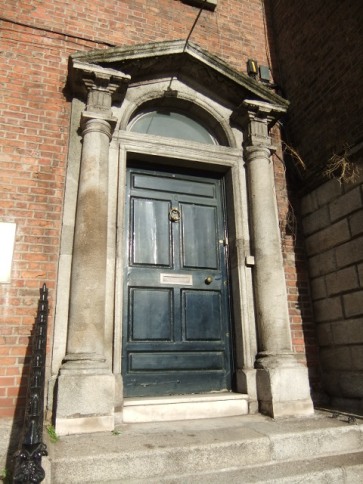 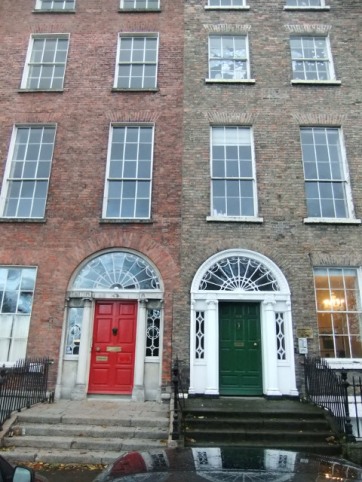 However, for me the highlight of our holiday was a visit to Fourteen Henrietta Street, which deserves a blog post to itself. Watch this feed!

bilingual blog about writing and books in Gaelic and English

...tales from a lesser lady novelist.

The darker side of speculative fiction.

Stories and photos from Scotland

I'm just a teacher, standing in front of a class, asking them to be quiet and listen.

Immerse yourself in Georgian and Regency England

Writing about Writing for Children

Her Dark Materials: notes from the world of children's books

Once a week, a selected candidate receives a free line edit of a 500 word fiction sample